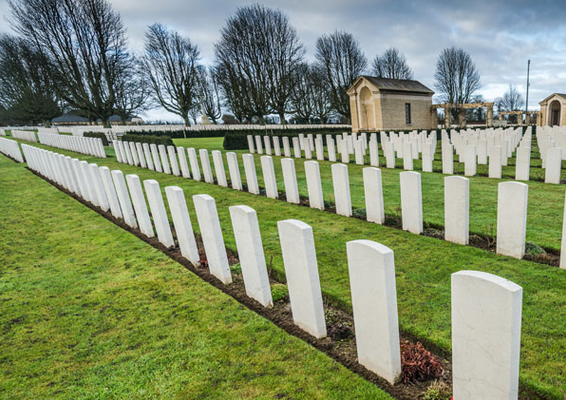 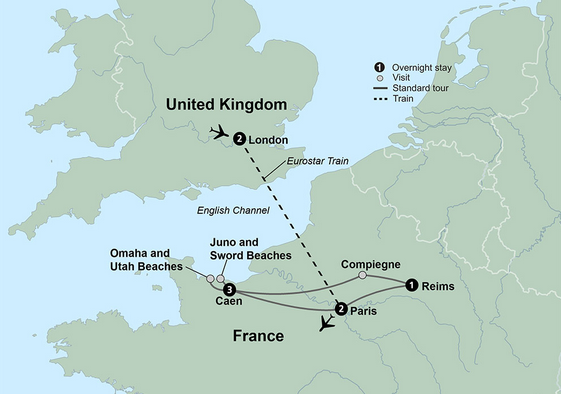 Day1
Overnight Flight
An unforgettable journey of discovery and remembrance awaits you on a sojourn to Northern France on the 75th Anniversary of D-Day.
Day2
London, England - Tour Begins
Welcome to London! Discover the city’s rich historical relationship with World War II. This evening dine amongst history as you meet your fellow travellers for dinner in the iconic Borough Market.
Day3
London
Uncover London’s myriad connections to WWII on an expert-guided walk. In Westminster, see iconic London sights including Big Ben, Westminster Abbey, 10 Downing Street, and Parliament. Then, go underground to the place history was made: the Churchill War Rooms. Navigate a labyrinth of corridors hidden under the streets of Westminster that sheltered Winston Churchill and his war cabinet from the bombing raids while they planned for victory. This afternoon you may take an optional excursion to Windsor Castle: originally built to guard the city of London, and the home of kings and queens for nine centuries, Windsor Castle was also used as a secret refuge for the royal family during WWII.
Day4
London - Paris, France - Caen
Whisk away from London to Paris on board the high-speed Eurostar train. Arrive in Paris and embark on a drive that delivers you to Normandy by way of the French countryside. Stop at Pegasus Bridge, featured in The Longest Day. This vital structure across the Caen Canal was captured by the heroic British 6th Airborne Division in the opening hours of the invasion, making it the most famous mission of Britain’s airborne division.
Day5
Caen - D-Day Landing Sites and Canada's Juno Beach Centre - Caen
Immerse yourself in the history of Normandy’s beaches – the site of the largest amphibious invasion in history. Visit Juno and Sword Beach, where Canadian and British soldiers sacrificed their lives among a deluge of air attacks, naval bombardments, and land offences. Continue on to Arromanche-les-Bains to view the Mulberry Harbour, one of the greatest engineering feats of WWII and a massive coup for the Allies. Visit the Bayeux Cemetrey and Memorial – the largest WWII cemetrey of Commonwealth soldiers in France. Pay respect to the 1,800 men of the Commonwealth land forces that perished and have no known grave. Next, explore the Memorial de Caen (Peace Museum) dedicated to providing a comprehensive history of the D-Day landings and Europe’s post-war transition.
Day6
Caen - D-Day Landing Sites - Caen
Set out for the Normandy American Cemetrey and visit the cemetrey grounds, the memorial, and the visitor’s centre. Visit two U.S. landing zones of the invasion of Normandy: Omaha Beach and this afternoon, Utah Beach. Discover Pointe du Hoc, a strategic German battery that defended Utah and Omaha beaches from the Allied invasion, where craters from cataclysmic bombings occupy the landscape to this day. At the Airborne Museum, learn the unique history of paratroopers in the city of Saint-Mère-Église.
Day7
Caen - Reims
On a meditative drive to Reims, stop in Compiegne and the Memorial of Internment and Deportation, dedicated to the 40,000 people deported to German camps. Later, arrive in Reims, the city where the World War II treaty was signed. Enjoy some free time, and consider a visit to the Square des Victimes de la Gestapo.
Day8
Reims - Paris
Before departing Reims, stop at Musée de la Reddition, the former schoolhouse where German officers signed a declaration of unconditional surrender. Afterward, an elevated dining experience highlights the region’s reputation for great cuisine and champagne. Raise a glass to Reims before arriving in Paris. Spend the afternoon at leisure and discover for yourself why this is truly one of the world’s great cities.
Day9
Paris
On the streets of Paris this morning, a local expert leads you on a walk through time on a WWII-themed tour of the city. From the Vel d’Hiv, Hôtel de Ville, Grand Palais, Invalides, Ecole Militaire, Panthéon, Luxembourg Gardens and Saint-Germaine-des-Prés, see the sites that tell the story of the liberation of Paris and what life was like under German occupation. This afternoon you may join an optional tour of the Louvre, or spend the afternoon at leisure. Tonight, bid farewell to Paris during an incredible meal inside one of the world’s most iconic landmarks, the Eiffel Tower.
Day10
Paris - Tour Ends
Your tour comes to a close today.

You will visit the following places:

London – noisy, vibrant, diverse range of people, ideas and frenetic energy – is the capital and largest city of both England and of the United Kingdom. Considered one of the world's leading "global cities", the city remains an international capital of culture, arts, commerce, education, entertainment, fashion, finance, healthcare, media, professional services, research and development, tourism, and transport all contributing to its prominence. Today, among international tourists, London is the most visited city in the world!

Paris is the capital and largest city in France, situated on the river Seine in northern France, at the heart of the Île-de-France region. The city of Paris, within its administrative limits largely unchanged since 1860, has an estimated population of 2,193,031, but the Paris metropolitan area has a population of 11,836,970, and is one of the most populated metropolitan areas in Europe. In 2009 and 2010, the city has been ranked among the three most important and influential cities in the world, among the first three "European cities of the future" according to a research published by Financial Times and among the top ten cities in the world in which to live according to the British review Monocle.  The city is the home of the most visited art museum in the world; ''the Louvre'' as well as the ''Musée d'Orsay'' noted for its collection of French Impressionist art, and the ''Musée National d'Art Moderne'' a museum of modern and contemporary art. The notable architectural landmarks of Paris include Notre Dame Cathedral (12th century); the Sainte-Chapelle (13th century); the Eiffel Tower (1889); and the Basilica of Sacré-Cœur on Montmartre (1914). In 2014 Paris received 22.4 million visitors, making it one of the world's top tourist destinations. It is also known for its fashion, particularly the twice-yearly Paris Fashion Week, and for its haute cuisine, and three-star restaurants. Most of France's major universities and grandes écoles are located in Paris, as are France's major newspapers, including Le Monde, Le Figaro, and Libération.

2019 marks the 75th anniversary of DDay. On June 6, 1944, Canada joined British, American and other Allied troops in storming... learn more

2019 marks the 75th anniversary of DDay. On June 6, 1944, Canada joined British, American and other Allied troops in storming... learn more

Lest We Forget: The WW2 Site That's Trying to Gain UNESCO Status

It was a fabled event in military history and has become etched into popular culture, the subject of movies, documentaries,... learn more

Don't miss any Travel News or Limited Time Offers! Get our Email Newsletter